The general importance of the grass family to the prairie and other notes. 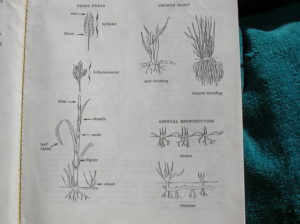 The grasses contribute most of the prairies plant biomass and provide fuel for prairie fires.  Humus form the delay of their dee and extensive rood systems are mainly responsible for the rich, black color of grassland soils.

The growth habit of prairie grasses is sod-forming or bunch-forming, or both.  Sod-forming grasses, such as cordgrass and witch grass, reproduce sexually from seed and asexually fro underground stems called rhizomes.  The rhizomes extend horizontally from a few inched to a few feet to form the parent plant and produce new shoots from their tips from the nodes along the stem.  This results in a dense strand of shoots that compactly occupy the soil.  A few sod-forming grasses also reproduce from horizontal stems above the ground called stolons.

Besides the taxonois classification, prairie grasses may be grouped according to their climatic origin as the cool-season or warm-season grasses.  Cool-season grasses, such as needlegrass and bluejoint are of other origin  They renew their growth in early spring and usually mature from April to early July.  Cool-season greases become semi-dormant during the hot summer months and renew growth during autumn.  By contrast, Warm Season grasses, such as big and little bluesteam, begin growth late spring and grow continuously during the summer and into early fall.  They mature during mid-fall.  Warm-Season and cool-season grasses mingle freely as their requirements overlap.

Many of these grasses provide eco-friendly and sustainable landscaping techniques.  Many landscape designers are using natural prairie grasses to cut down on maintenance costs, improve the natural habitat for local wildlife, reduce soil erosion and reducing the use of herbicides and pesticides. To order

Copyright © 2021 Your Name. All rights reserved.